Commander Riker is on a quest to find his mother in law, Lawxana Troi. Word is that she has gone back in time to follow her dreams of becoming a burlesque queen in the 21st century. But as the daughter of the Fifth House of Betazed, holder of the Sacred Chalice of Rixx, was the heir to the Holy Rings of Betazed, she is presence is needed for a diplomatic negotiation with the Ferengi. Will he get her to leave? Or will he as well become seduced by the charm of Cherry Pitz and the gals at the Home for Wayward Girls and Fallen Women.

Is that really what is happening? Has The Slipper Room been invaded by the Borg? Is Q in the Sector? You are just going to have to show up on Thursday night to find out!

Rosie Cheeks will be warming up the crowd as Jadzia Dax from that amazing DS9 episode Trials and Tribble-ations!

Following on the footsteps of Hotsy Totsy Burlesque’s successful Stephen King, Harry Potter and Star Wars 1978 Holiday Special tribute shows, Cherry Pitz and Joe the Shark present a brand new burlesque tribute to Gene Roddenberry’s Star Trek! With six different TV series, countless books, comic books and a movie franchise, Star Trek is one of the most loved science fiction franchises in the world. Kirk, Spock and many of other members of the Federation have visited us in the past few years, and we are glad to have the back.

Created by Gene Roddenberry, Star Trek has been a cult phenomenon for decades. The first television series, simply called Star Trek and now referred to as "The Original Series", made its NBC debut in 1966 and aired for three seasons. It has been followed by an animated series, movies, and various other incarnations of Star Trek including Star Trek: The Next Generation, and most recently, Star Trek: Discovery. Fans are eagerly awaiting the arrival of the new CBS series, Star Trek: Picard, to air in 2020. Hotsy Totsy is paying tribute to decades of amazing work with nothing but love and fondness.

Eleven years ago, Cherry Pitz and Joe the Shark partnered up to produce Hotsy Totsy Burlesque and it’s been a fabulous ride! We play to often sold-out shows and our dedicated fans gleefully follow the soap opera that is Hotsy Totsy often declaring after each performance, “That was the best show you folks have ever done!” As performers and writers we have grown as a troupe and as friends and are happy to move into our 11th year looking forward to the rhinestones, glitter and mayhem the next 10 years shall bring!

Every month you are invited to The Home For Wayward Girls and Fallen Women. The residents of the home need money to keep their hotel open and to buy G-strings and glitter. Sadly, the shows have had their technical difficulties and in the past they have had to combat Daleks, Darth Vader, The Borg, Zombies, Network Censors, Evil from other dimensions and He Who Should Not Be Named! The ladies promise you beautiful, clothing-averse women, lots of laughs, spinning tassels, and flying underpants. So join us for Hotsy Totsy Burlesque at The Home For Wayward Girls and Fallen Women where the motto is "We've fallen, we can't get up, and we like it that way!

Sorry, The Slipper Room is 21+


CHECK US OUT IN THE NEW YORK TIMES! https://nyti.ms/2yepCP6


“All-encompassing in its nod to vaudeville, the show is high on craft. And while it carries history's torch of old school stage entertainment, Hotsy Totsy slips in a message for our times, that "the geek shall inherit the earth." – The Edge
Read More 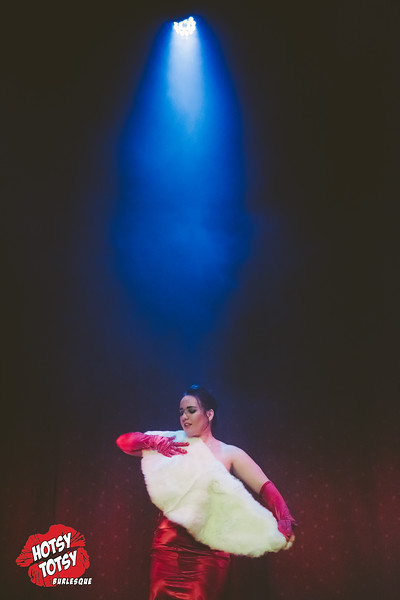