The Holiday Season, Cherry’s favorite time of you because it means it’s time again for the annual Hotsy Totsy Tribute to the Star Wars Holiday Special. This year, Cherry Pitz finds herself visited by three ghosts, the ghosts of Jedi’s Past, Present and Future, who want to teach her the true meaning of Life Day (Also known as Wookie Christmas). Join us at The Slipper Room for a night of Star Wars themed burlesque acts and clips from the 1978 Star Wars Holiday Special. Fun Fact -- George Lucas has reportedly said: "If I had the time and a sledgehammer, I would track down every copy of that show and smash it." We are so proud to own a copy!

Erika Rodgers is back to warm up the crowd!

If you have not seen The Star Wars Holiday Special, then you have not seen special guest star Bea Arthur sing and dance with the space alien bar patrons from the Tatooine Cantina, (here is a clip- https://www.youtube.com/watch?v=RzXKySxPFCI). The Star Wars Holiday Special was quite possibly the worst holiday special ever conceived. It is literally Star Wars meets rejected skits from The Carol Burnett Show and it stars the cast of the original Star Wars trilogy Mark Hamill, Carrie Fisher & Harrison Ford (they were under contract and couldn’t get out of it). It was written by the staff writers of The Carol Burnett Show who admitted they had not seen the movie, and featured special guest stars Harvey Korman, Bea Arthur, Art Carney, The Jefferson Starship and a cast of fur suited character actors as Chewbacca’s family. It is chock full of WTF moments, such as Carrie Fisher singing and even includes Wookie-porn.

This is an annual tribute, but it will be a brand new script! Celebrate all things Star Wars with us 8 days before Star Wars: The Rise of Skywalker is released!

Over eleven years ago, Cherry Pitz and Joe the Shark partnered up to produce Hotsy Totsy Burlesque and it’s been a fabulous ride! We play to often sold-out shows and our dedicated fans gleefully follow the soap opera that is Hotsy Totsy often declaring after each performance, “That was the best show you folks have ever done!” As performers and writers we have grown as a troupe and as friends and are happy to move into another year looking forward to the rhinestones, glitter and mayhem the next 10 years will bring!

Every month you are invited to The Home For Wayward Girls and Fallen Women. The residents of the home need money to keep their hotel open and to buy G-strings and glitter. Sadly, the shows have had their technical difficulties and in the past they have had to combat Daleks, The Borg, Zombies, Network Censors, Evil from other dimensions and He Who Should Not Be Named! The ladies promise you beautiful, clothing-averse women, lots of laughs, spinning tassels, and flying underpants. So join us for Hotsy Totsy Burlesque at The Home For Wayward Girls and Fallen Women where the motto is "We've fallen, we can't get up, and we like it that way!


CHECK US OUT IN THE NEW YORK TIMES! https://nyti.ms/2yepCP6

“All-encompassing in its nod to vaudeville, the show is high on craft. And while it carries history's torch of old school stage entertainment, Hotsy Totsy slips in a message for our times, that "the geek shall inherit the earth." – The Edge
Read More 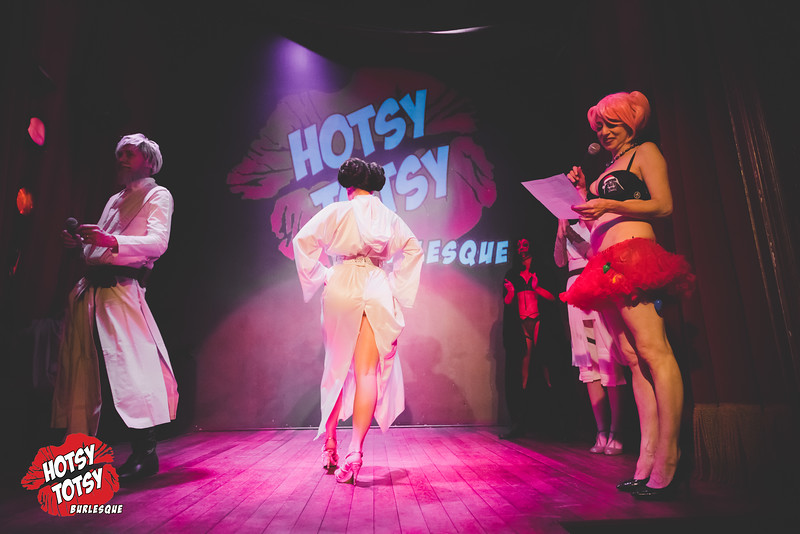